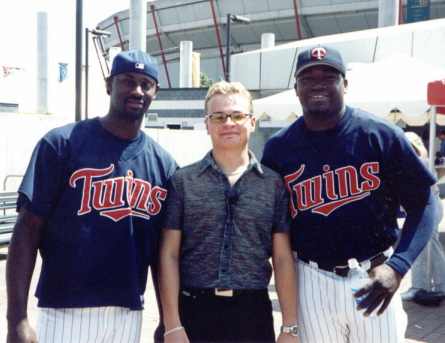 A lot of folks around the Twin Cities have asked about my time as the official magician of the Minnesota Twins. It was quite the wild ride! For 6 season I performed magic at the MN Twins baseball games at the old Metrodome in Minneapolis, Minnesota. Of course that stadium is gone but the memories live on. It all started with me performing magic at the Minikahda Club for their annual family holiday party.

That evening’s excitement began when I noticed some TV anchors among the guests. They were Pat Miles from WCCO and Paul Majors from Kare 11. I remember being nervous performing my magic for them but they were very receptive. I know Paul Majors has since left the Twin Cities area but I’m not sure about Pat Miles. After I left their table, a gentleman approached and requested my magical performance at his table for his family. This gentleman happened to be Matt Hoy, director of operations at the Minnesota Twins!

Was he planning on hiring a magician?

After amazing his family with my close up magic, he asked for my business card. I’m not sure if he went to the party thinking he was going to hire a magician but that is exactly what happened! The next week I was invited to meet with him and his associates at their offices in Minneapolis (in the old Metrodome). Back then, the Twins weren’t “winning” like they are at the moment. Attendance was lacking a bit due to our slump in the standings.

The Twins were looking for ways to make the entire experience, win or lose, a memorable time for the fans as they attend the games. They upped their game and wanted to add live entertainment options and Matt thought I would be a perfect fit. I remember driving back to my home in Maple Grove thinking of how cool it was becoming the Official Magician for the Minnesota Twins!

Over the six seasons there, I performed for countless celebrities and VIPs including St. Paul mayor, Norm Coleman, MN Twins legend Kirby Puckett and country music legend, Kenny Rogers! It was always fun because I never knew who I would run into at the games. The fans loved the audience participation involved with strolling magic. Most people don’t get to experience magic in person. This includes the MN Twins players too!

Two of my favorite players back then were David Ortiz (now a baseball legend) and Latroy Hawkins (now a TV commentator on Fox Sports North). I often performed for the players as they would come out to sign autographs and chat with the fans before and after the games. I was invited to perform in the locker room of the players. I’m pretty sure I was the only magician ever to step foot in the Metrodome lockeroom.

Most days I would stroll through the entire stadium and entertain the fans in between innings but often I also was asked to perform in the private suites for corporate parties and private events. This was all before the digital age which is unfortunate because I don’t have pictures and videos like I would today.

Here you can see me wowing the St. Paul mayor, Norm Coleman (who later became a MN senator)

. I would really blessed to land this gig because it opened up so many other doors. For example, the main newspaper of Minneapolis, The Star Tribune, wrote an article on my performances there and featured it on the front page! 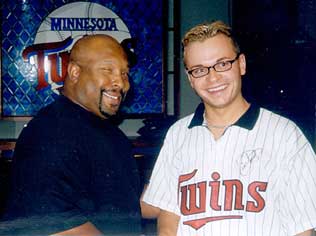 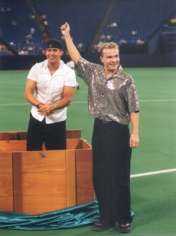