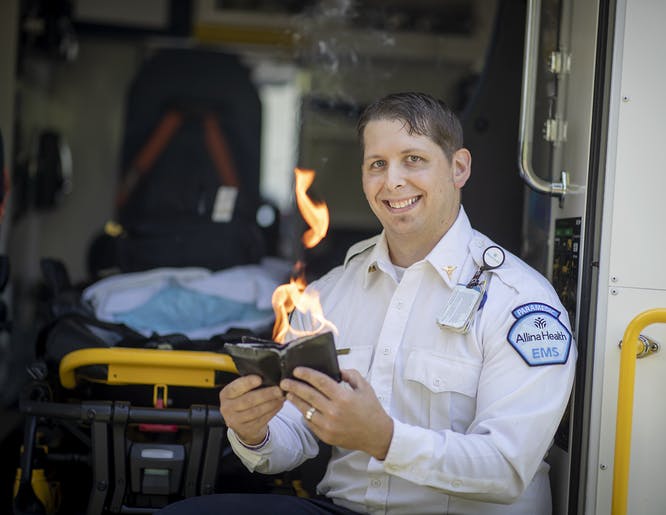 I just love this story that was recently feature in the Minneapolis Star Tribune. A local paramedic in the Twin Cities also happens to be an amateur magician! Using magic, he’s able to get kids to relax and make their ride to the emergency room less stressful for them. As we know, kids of all ages love magic and it often does prove to be a great distraction from experiences (like riding in an ambulance) that normally aren’t considered “fun”.

Even though I haven’t met Ivan Mazurkiewicz yet, I love how he uses magic tricks in the back of his ambulance to keep his patients calm in what often can be a chaotic experience. According to the article, he became a paramedic in 2010 and after some experiences, decided he should learn some simple magic to help lighten the mood on the journey. He took professional magic lessons from Larry Kahlow, of Eagle Magic (the oldest magic shop in the country).

Apparently he has the quite repertoire now as he told the Star Tribune that has has a suitcase full of magic tricks! He was even recognized by his partner being nominated for Allina’s “Commitment To Care” award. Ivan has realized that using the power of magic allows you to connect with people on a deeper level. Being a professional magician myself for over 32 years now, I’ve come to understand this myself. This is the real reason people hire a magician to entertain at their corporate event. It’s not really the “entertainment” but the “connection” that the power of magic has.

For example, when I leave a group of event guests amazed and in awe, I always overhear them later engaging with eachother asking things like, “Did you feel it in your sleeve?, How did that change in your hand?” etc. It sure is a lot of fun to perform magic even if you’re not a magician but rather a paramedic!